Laughing all the way to the bank... "60 Mario and friends"

If you've noticed the current iTunes "game" chart this week, you would notice this dubious entry: 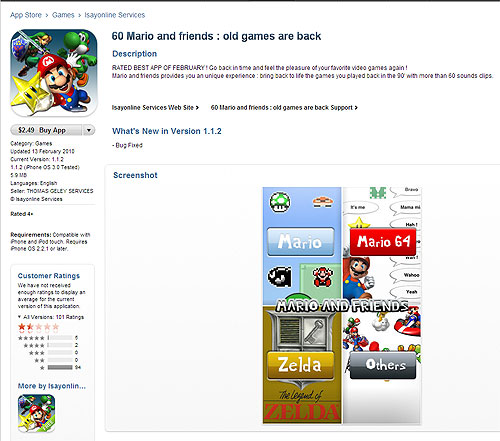 The intentionally ambiguous entry is masquerading as a game, but is actually a set of sound effects from said games. As to the quality (and origin/legality) of the sounds I can't say, as I'm not about to give this ass-clown $2.50 to satisfy my curiosity. But clearly this guy is making a pant-load of cash taking advantage of people too lazy to look closely at the listing. Not only that, but the app was originally listed at $0.99 and has since increased in price. He also updated the app version (see the screen shot), apparently fixing some "bugs". Clearly this is just an attempt to hide the 9 extremely negative reviews which say quite clearly, "this isn't a game, save your money!".

It's this type of thing that worries me about where the iPad and iPhone might take computing in general. It's not that having a central "app store" that includes these features is necessarily a bad thing, but Apple's walled-garden, "all your apps are belong to us" implementation and flawed approval process encourages this kind of bad behaviour. Meanwhile, quality apps made by quality developers sit on the sidelines and are marginalised. This leaves very little incentive for quality development, and no alternative places for developers to go get their apps out there. This is all aside from the implications closed platforms like iPad/iPod/iPhone have for free software.

Personally, I'm getting to the point where I'm ready to chuck out my iPod and move to Android as my next phone.